Skip to content
Dear PRCs, I am a former NICU baby who was diagnosed with a poor in utero diagnosis. After three doctors told my parents to abort me and my parent’s strong fight for my life 18 years later, I am currently working on a pro life legislative bill and have two ministries.:)
This is for pregnancy centers or others also involved in pro life in various ways!
IN order for more lives to be saved, please read the following. I wanted to mention some important aspects to possibly add to your center.:):)
1st: Education videos: If I have not already talked to you about Dr. Levatino’s, a former abortionist, abortion videos I highly recommend them. They are done with Lila Rose, the president of Live Action.:) These videos are extremely well done and factually done. Dr. Levatino speaks from a kind, caring and compassionate manner in these videos. These videos are presenting to these women through a kind heart and manner what abortion is. They are hearing about abortion from a man who did abortions himself.  He has a position to state about what abortion is as he has done them and understands.  He is a wonderful and kind man who cares. These videos are powerfully used!
Dr. Levatino is so being used by God to convey the realities of abortion and my mom has shown these videos to several of her abortion-minded clients, and the impact has been huge. We only show these videos to women who are considering abortion (AM or AV AND those who have never had an abortion before). Each video teaches women about the truth of what abortion is.
I know the most common abortions that we see at least at our center are the pill.
He has a pill video and more:
https://www.youtube.com/watch?v=lRDnVSMr5j0
Here is the official website:
http://abortionprocedures.com/abortion-pill/
Secondly adding “poor in utero pregnancies” on your website: I find it extremely important that if you do not already market on your websites about being there for women who have a poor in utero diagnosis, I highly recommend so. I was on an abortion clinic website and they advertised themselves as “caring for families who have a poor in utero diagnosis.” We must counter that and show families that WE are here for them. What I read on their website was horrid. They made themselves sound like a “loving and caring” place for families whose children are sick, and they offer abortions as the “solution.”  We must specify the poor in utero diagnosis so that they know they can come to PRCs.

Meeting Lila Rose, Glenn Beck,  Crystal, Jenna and Dan, and David Daleiden and being with our wonderful friend, Rebecca Kiessling,  hearing and knowing their stories was truly powerful. These people LIVE JESUS!! They humble me and all the more inspire me to never stop fighting and praying for ALL life.  Abortion is the Holocaust of our generation.  How God’s heart breaks. Abortion stops a beating heart and terribly wounds a woman’s heart, both the mother of the baby and the father of the baby’s hearts.

My mom and I got to meet Glenn Beck which was amazing!!  He is this humble man, and he is so kind!  He was leaving the set area as my mom and I were having a photo outside the studio, and we had the blessing of him photo bombing us and then talking to him. What a wonderful, humble and kind man who is such a bold voice for truth and justice and love!

Jenna and Dan have a son who was born with anacephaly and it is a poor in utero diagnosis. They found out their son was sick and did a bucket list to do

special things with him.:):):) What a beautiful couple that love their son

Lila Rose started Live Action which exposes Planned Parenthood, and she is so beautifully full of Jesus’ love and life and passion for all that grieves Jesus’ heart.  Please support Live Action as they are Jesus’ very heart in this dark time where babies’ lives are being robbed from them in this culture of death. She has a heart of gold as does her staff like sweet Becky Yeh! 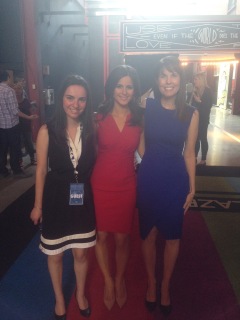 Crystal Willis-Blount was raped and chose life and her daughter is now 17 and again this is another strong, beautiful woman who is a loving voice of truth and love and hope.

Mom and me with these wonderful souls: Jenna, Crystal and Rebecca.

Rebecca Keissling was conceived in rape and she explains that the law ultimately saved her life because had it not been illegal, her mother would have aborted her.  Rebecca founded Save the 1 and was the one who sought us out to share my poor in utero diagnosis story. She like our dear friend, Darlene Pawlik and all theses souls I have mentioned are bold voices in this generation for Jesus’ heart for ALL life. ALL life is valuable.  God determines our value! Not man!

These are stories of hope, ones that only Jesus can give hope!!!!!!!!!

Beauty! True humbled beauty that our Yeshua gives!  He is raising up voices to be HIS very heart to this generation.

I had the joy and pleasure of meeting a wonderful woman who loves Jesus so much and has a powerful story of redemption, life and hope. She has generously allowed me to share her link and I so encourage everyone to check this out.

So I joyfully introduce to you, Darlene Pawlik, a great lover of Jesus that God has connected me with to further bring awareness to the hope found in Jesus Christ and His Heart for ALL life and the sanctity of life.

I love her resource because it shares about the reality of our society and that we must stand for which is ALL life, not stand for only some. If we are going to be His vessels to end abortion we must be His heart for ALL life!!!!!!!!!!!!!!!!!

Now introducing another fabulous woman I met at the conference, Rebecca Kiessling. She is also a mover and shaker for Jesus like Darlene.:) See her story and God mission:)

Our humanity is not defined by our health status.  We are intrinsicly valuable made in God’s image.  Our value comes from who we are in Jesus! Someone who has a poor in utero diagnosis is as valuable as someone who isn’t sick. We must see life as defined through Jesus’ lens.